A thousand years ago, we built twelve giant mecha to fight a cataclysmic war. We called them Thrones. Down the generations since that great war, dynasties have formed, each drawing its legitimacy from the ownership of one of these ancient weapons. Possession of a Throne bestows wealth, power, authority over whole star systems, and a seat on the Galactic Council.

You're going to steal one.

Stealing the Throne is a storytelling game of giant mecha heists. Zero-prep and GMless, it's specifically designed for exciting one-shot play. Build a Throne, invent its fiendish defences, and then take them apart one-by-one with your crack team of thieves.

All you need to play is an ordinary deck of playing cards, a six-sided die, and 3-5 players.

Stealing the Throne is inspired by action-heist media such as Ocean’s 8, Fast Five, Rogue One and Leverage ("Let's go steal us a giant mech"), Battletech, and a dash of the decommissioned Jaeger scrapyard sequence from Pacific Rim: Uprising.

"At the end of our game of Stealing the Throne, we all sat back and thought ‘damn, I want to see a movie of this!’"

The rules draw from Lovecraftesque by Becky Annison and Josh Fox, Sol Survivor by W.H. Arthur, HEIST: Get Rich or Die Trying by Allie Bustion, John Wick’s Wilderness of Mirrors, and Facing the Titan by Nicolas "Gulix" Ronvel.

These playsets provide inspiration in the form of Throne-specific mech systems, background and obstacle prompts, and lists of thieves and their rivals. Use them as quick-start tools to launch your games, inspiration for building your own Thrones, or prompts to fall back on if you need a mid-game creativity boost.

This edition of Stealing the Throne was funded on Kickstarter during #ZineQuest3, thanks to the generous support of 583 amazing backers.

Have you purchased Stealing the Throne in print? Are you looking for a copy in PDF? Just reach out to me with some form of proof of purchase (a photo is always great!), and I'll get you sorted with a download key.

During the heist, players take on one of three rotating roles: Throne, Thief, and Backup. The Throne sets a scene, describing the fiendish security measures the Thief must overcome to advance towards their prize. The Thief faces the challenge, making use of flashbacks and calling on assistance as needed. The Backup helps the Throne by adding details and roleplaying NPCs, and comes to the Thief’s aid if the situation gets dicey.

"The game elements worked together beautifully to ensure a GM-less experience that was full of tension, surprise and challenge. From designing the mecha before we battled with it, to taking turns playing as the enemy, to having the option to self-sacrifice, it all came together to leave our group awestruck at the result."

Once the security measures are defeated and the Throne secured, the thieves make their getaway. This is everyone’s chance to finally take control of the giant mech in a rapid-fire montage of big action and (potentially) big reveals. Will your thief escape with the prize, go out in a blaze of glory, or perhaps reveal themselves a traitor?

You can download a detailed example of play below, covering everything from building the throne to the heist and ultimately the getaway. In it, three players plan and execute the theft of Glaive of the Cenotaph from its resting place in the central gallery of the Museum of Art, Culture, and Warfare.

Will the thieves secure their prize and make it out alive? Download the free example and find out!

Stealing the Throne works great online — all you need is a virtual tabletop where you can easily manage a deck of cards.

To get you started as quickly as possible, I've put together a downloadable template for playingcards.io. Here's how to use it:

This .pcio file quickly sets up a room with a Throne deck, alert level counter, and slots for Throne systems. It's up to you to bring the crew!

Stealing the Throne was originally published in the December 2020 issue of in🔥die zine. You can still pick up the core rules in that zine, alongside games, essays, and supplements from a variety of brilliant indie designers. All for the low price of $4!

In order to download this game you must purchase it at or above the minimum price of $10 USD. You will get access to the following files:

Support this game at or above a special price point to receive something exclusive.

If you're unable to budget for a copy of Stealing the Throne, please claim one of these free community copies, no questions asked. These community copies are available thanks to generous Kickstarter backers, who made all this possible!

Killer game, had a ton of fun playing it with some folks and I'm looking to play it more often with some new folks!

Would it be possible to get: a) a low-ink version b) a booklet version c) a+b

Stealing the Throne is an amazing game and I can't find any reason why this should be missing in your game collection!

It's so good, I even wrote about it on Twitter!

Stealing the Throne is a GMless RPG for 3-5 players, with no prep involved! You play as a group of thieves trying to heist a powerful mecha. It reminds me of a number of Gundam anime that start with kids stealing the latest Gundams to fight the empire.

There are some really clever mechanics with the game. I love the alert level which makes the Throne more dangerous if a thief has previous been detected. I also love that the mecha has multiple systems, which can be powered up during the escape to help the thieves in their getaway. Stealing the Throne manages to create an expansive world with just under 40 pages. The intro about the Thrones is very well written, and each of the four included playsets add depth to the lore. I highly recommend this game!

Such a cool premise, with an easy ruleset too! All you need is a deck of cards, no prep or anything.

We told an epic story of stealing back the Star Goddess, an ancient Throne that had watched over our ancestors. It was such a close call, for a while we weren't sure we were going to get away!

Really great fun, definitely want to play again. Such a great heist game with lots of replayability. Grab it for sure!

Guess what, played it again!

This time we teamed up to steal The Burning Soldier from the tyrant Her Baroque Majesty Callixte XII.

It was a very close call, almost everything went wrong. But finally, 3 of 4 thieves made it into the cockpit... only for a traitor to be revealed!

Such a blast, you gotta play it yourself! 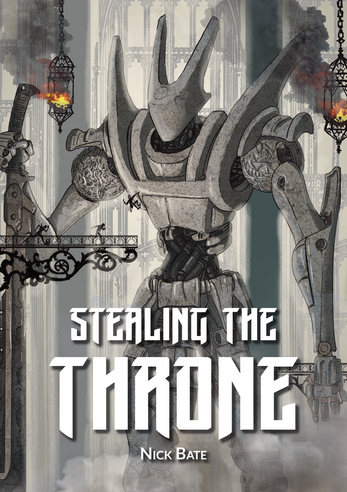 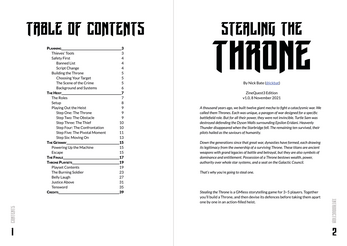 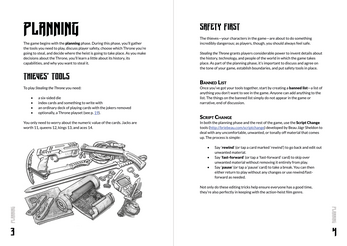 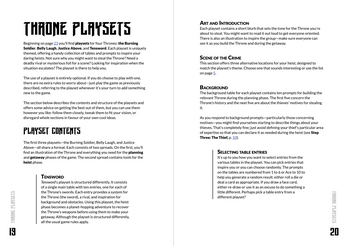